-A review by Serena Juchnowski: 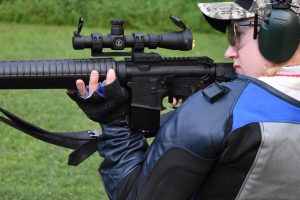 When service rifle rules changed to allow bolt releases, I must admit I was skeptical. There are several popular varieties, the two most popular of which I have observed being the Bob Hahin AR Bolt Release Extension and the Magpul B.A.D. (Battery Assist Device) Lever. It took a little bit of getting used to, but I have come to love the Hahin Bolt Release. It allows me to close the bolt without moving out of position during rapid

fire strings. I can do the same in slow-fire prone. In offhand, I do not want to risk having my finger in the trigger guard when closing the bolt so I press the top of the lever mounted above the bolt release on the outside and it shuts the bolt just as it would without the extension. I have heard other competitors recount stories about different levers having issues with the bolt locking back during rapid fire, costing them valuable time. I have never had an issue with this lever.

Some prefer the style of the Magpul lever, that puts the end of the extension right by the trigger finger. I much prefer it on the side of the rifle so that I am acutely aware when I push it and do not accidently catch it or hit it on something. It really is a matter of preference, but for me the Hahin Bolt Release Extension is a reliable and convenient addition to my service rifle.